Remember when you were little and played the game of “tag” with your friends. Welp, that game just got a whooole lot more awesome! Let me present to you tag’s big brother, Humans versus Zombies. The mechanics are simple; humans blast zombies with Nerf ammo, marshmallows, socks, or anything else soft in an effort to survive until the end of the game. Zombies try to settle a rather large stomachache by filling their guts with the most delicious thing they know of, humans. Full description after the jump.

So how do you fight such a wave of undead as this? Ohh, I’m glad you asked. HvZ wouldn’t be HvZ without one thing, Nerf blasters. 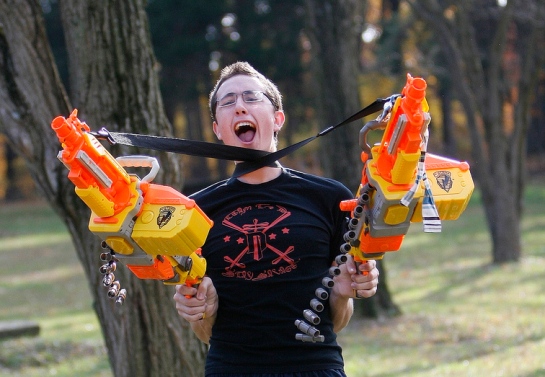 Sweet, sweet Nerf blasters. Vulcans, Recons, Nitrons, Mavericks, you name it! If it fires foam it’s game! Humans are allowed to carry as many Nerf weapons as they like. This means that every player has a unique playstyle. There are snipers, reconnaissance, assault squads, a whole slew of unique setups is available. The only requirements are that modded blasters be approved by game moderators (for safety) and that any paint jobs given be brightly colored (no realism) so as not to scare people. Melee weapons sometimes require special permits that can be earned throughout the game, and socks or marshmallows are always allowed as a secondary form of ammunition. Although if you go the marshmallow route you may find yourself snacking through your ammo. 🙂

When a zombie approaches a human, the human fires his Nerf darts at the zombie. Skilled humans can hit zombies from dozens of feet away, while skilled zombies can duck and weave their way around the flying darts and are nearly impossible to hit. If a zombie IS hit with a nerf dart, sock, marshmallow or anything of the like, they are “stunned”. While stunned, they may not interact in the game at all until their respawn time is over. This is just like a video game respawn. These times are usually between 10 – 15 minutes, during which time a zombie lowers their headband around their neck to indicate that they are stunned. In some games, the timer can be reset by hitting a zombie while still stunned. Humans using this tactic can essentially keep a close-by zombie stunned indefinitely. This rule reinforces the idea of stunned zombies leaving humans alone. If the zombie is successful and tags the human, the human places his armband around his neck for the “infection time”. During his infection, the human may not interact with any other players. After the infection (usually about 10 minutes) he moves the band to his head and is now a zombie.

The different choices in load-outs (the weapons you choose to use) and skill levels give the game a certain element that makes it the addictive, strategy-driven wonder that it is.

Original Zombies are also known as the first day nightmare. On day one of the game, these zombies have no markings whatsoever to distinguish them from anyone else on campus. The OZs can literally be anyone, including your professor in some cases. These zombies usually end up taking leadership roles within the zombie horde. They decide where to send their minions, how many to send, and most importantly, when to attack.

Sneaking – I’m guessing there are a few areas on your campus that become highly congested throughout the day. Those areas are death-traps. Zombies will use these areas to their advantage, crouching behind non-playes to hide their distinguishable headbands. They stalk humans here, staying behind their victim and out of sight. When they are within arms reach, WHAM! They give the target human an infecting hug and the horde grows!

Ambuscades – Lone zombies use this tactic more than any other. They like to hide just around corners, outside doors, or in large bushes and wait for their victim to wander too close. When they pounce, the target human often has about a second before they are turned.

Rushing – Single zombies in the open aren’t too much of a threat. They fix this by gathering together in what are known as hordes, large groups easily exceeding 100 zombies. Hordes are commonly seen patrolling the hub of campus, waiting for humans to show themselves on their way to or from a class. When the human is spotted, all zombies run at the target, swarm around them  and then collapse in on them. The human is overwhelmed by sheer numbers, and the horde slowly grows. Lone humans should run at the first sight of a horde. This tactic is also used during missions. Humans are usually grouped together in missions and, when well organized, can send a “wall of foam” at approaching zombies, essentially stunning everything in sight. Zombies get around this by hiding behind other zombies. When rushing, the first row can typically be stunned by a large human unit. It is the second row that then shoots out from behind the first (stunned) row and attacks the humans. 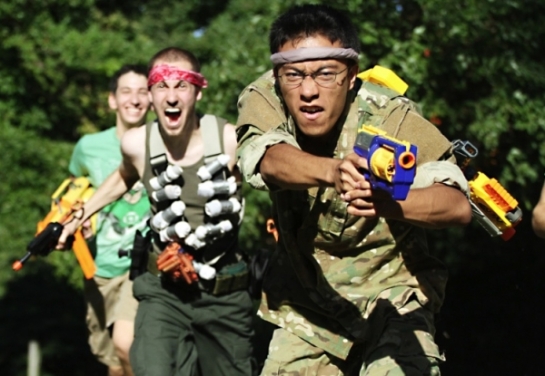 Games typically last one week, during which missions are given to the players. This is the meat of the game, because outcomes of missions affect how the game evolves throughout the play-period. Missions may be things like protecting an area for a certain period of time, rescuing a VIP, retrieving a piece to a broken-down airplane, etc. Human successes make surviving easier by creating safe zones, giving extra ammo or even blasters, or increasing the zombie respawn time. Successful zombie missions make it harder for the humans to survive by removing safe zones, decreasing zombie respawn times or giving special attributes to some zombies, such as the use of a melee weapon.

Here I am with my loadout, a Praxis and a Proton, along with a few marshmallows for good measure.

Connections                                               The game ends when either at least one human survives until the end of the last day, or when all humans have been turned into zombies. But what the game itself creates lasts much, much longer than a week. The game is very much a relationship-builder. Without a doubt, you’ll meet dozens of people that will become your friends and allies throughout the game (I must have made 20 myself). I’ve even heard stories about couples developing and ending in marriage because of it. I myself recorded the whole game at Auburn University and posted it online. I’ve even made friends as far away as California because of it!

So what is HvZ? It’s a zombie-hunting, foam-flinging, friend-forming thrill ride where you either survive the zombie apocalypse as a campus hero, or become one of the undead and get to scare the whiskers off your friends! It’s the biggest Nerf war there is, and it’s the adrenaline rush of a lifetime!

So, human… You ready to have an adventure? 😉

Get your foam on

The full season of HvZ at Auburn University can be seen here, in full 1080 HD first-person.